A Guide to English Bicknor

Read about the history of St. Mary the Virgin, English Bicknor...
​This 12th century parish church is built in the outer bailey of a marcher castle. The Normans adapted an ancient site (possibly on Offa's Dyke), and the defence ditches can be found around the churchyard and the adjoining field to the south: note the now tree-covered motte (mound) which would have had a wooden palisade round its top. 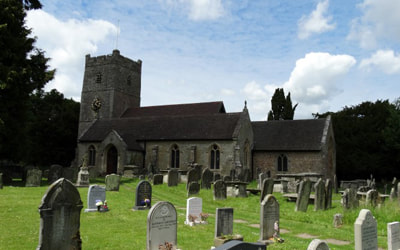 ​The original building had a central tower (like the nearby Staunton church) but this collapsed to the north west. Its site was then included in the chancel, and the ornate west doorway moved to its present position behind the Jacobean pulpit. For many fine examples of such "beak head" carvings, go to Kilpeck in South Herefordshire. Note that the chancel is out of alignment, a common arrangement said to symbolise Our Lord's broken body.

A new tower was built to the west; it now contains our six bells, five from 1709, the treble from 1718, all by Rudhall of Gloucester, and restored in 2007. The new ringing chamber can be seen through the west screen; the opportunity was taken to utilise the space below as an amenity room and toilet.

In the 13th and 14th centuries the chancel was lengthened to almost the length of the nave, and Gothic arches replaced the Norman ones. It would have been usual to find a rood loft in the chancel arch, and stained glass and wall paintings, but if so these perished probably in the Reformation.

At the east end of the south aisle is a chapel, with its original screen, built as a chantry for the Machens of Eastbach Court. The family have now died out, but it was they who built the block of alms houses ("Lucy Court" after Lucy Machen) outside the lych gate.

Balancing this on the north side was a chantry for the Wyralls of Bicknor Court. These had died out by the time of the 1840 expansion work, by which the aisles were widened, and the chantry eventually became the present vestry: note the three piscinas for washing the holy vessels, which presumably originated by the three church altars. Note also the niche for the effigy of Ralph de Abenhale (Avenhale), the first rector, that is now in the north aisle.

In the vestry too is a fireplace, one of four from 1840 (you can see the surrounds of two others at each end of the south aisle) whose chimneys are angled around the windows above. It seems these were later abandoned in favour of two tortoise stoves, in use in living memory - the hole for the exhaust pipe of one is still visible in the ceiling by the war memorial in the south aisle.

The 1840 re-ordering also provided the present east window (the glass is later), and filled the nave and aisle with pews all facing the pulpit, which was more central than now. The present pews are more recent, probably around 1890, whilst the high altar is laid out as in the 1908 dispensation.

​Of the effigies in the north aisle, the one of the priest in full vestments has already been mentioned; the other two are of Lady Cecilia de Muchegros (the "true patron") who died in 1301, and her great grand-daughter Lady Hawisia de Bures (died before 1348). Cecilia it was who presented Ralph de Abenhale. One effigy holds an object thought to be a "heart", the body being buried elsewhere; or it might, unusually, be an egg, ancient symbol of the Easter Resurrection. Lady Cecilia owned a coal mine before the free-miners of the Forest of Dean were given their charter by Edward I in return for services as sappers in his Scottish campaign - the origin of the Royal Engineers. 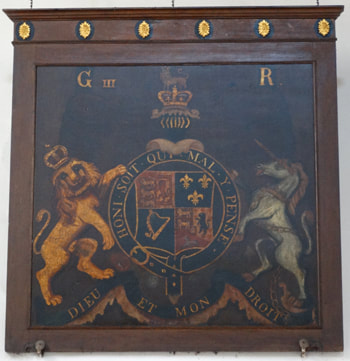 ​The commandment boards with the Lord 's Prayer would have originally hung above the high altar. They date from 1794, and are the same style as the Royal Arms of George III. Inside the Garter, the top left (dexter) quarter has the three lions (technically leopards) of England side by side with the lion rampant of Scotland. Top right, the fleur-de-lys of France, a claim not given up until the Peace of Amiens in 1802. Bottom left, the Irish harp. And bottom right, the German lands of the Georges: the two lions of Brunswick, the black lion rampant of Lubeck, the white horse of Hanover, and in the middle, the crown of Charlemagne, since our George still held the office of Treasurer of the Holy Roman Empire.

Outside the entrance porch, on the right, note the inscription on the nearer of the table tombs. Did the young girl of 14 married in 1706 die of childbirth or typhoid? She was obviously much mourned. The churchyard also contains two war graves.

The village name may be derived from "Bica's Over" (ie. over the river), Bica perhaps having been a Saxon Lord of the Manor. "English Bicknor" is used to differentiate from "Welsh Bicknor" on the other side of the Wye - the latter occupying what was a detached part of Monmouthshire until the mid 19th century.

GIVE THANKS for nine centuries of devotions in this holy place; do add your own. And so "The Lord preserve your going out, and your coming in, from this time forth, and for evermore." - Psalm 121